We're Hiring! See How to Apply →

Narcissism can be a malignant malady. A narcissist may present with overt or covert tactics, and there’s even a narcissism spectrum—ranging from healthy to pathological or full-blown Narcissistic Personality Disorder. The narcissism trait also has the capacity to consume anyone’s personality and spread like wildfire, reaching across sexual orientation, age, and other social identity facets. The narcissist can be a family member, friend, romantic partner, or colleague. They can even hide in plain sight behind their plastered façade mask.

If you’re reading this, you may have been feeling like a deflated balloon that’s been popped with a pin by someone who could be on the spectrum. If you’re hungry to learn more about narcissism for empowerment purposes, feel free to digest the following scenario and subsequent information:

A gold mine manager works extended shifts underground wearing a hard hat, delegating, and even getting their hands dirty while extracting gold alongside their crew members. Despite the blood, sweat, and tears that this person sheds during labor, the work is satisfying and replenishing. Their top patron happens to be the founder, CEO, and face of the nearby gold reserve that’s planted at the center of nearest town in a skyscraper that’s tall enough for individuals to see from nearly 60 miles away. The gold reserve represents a narcissist’s grandeur—the inner vault where the narcissist’s exaggerated sense of self as a supreme, god-like figure accumulates. This patron relies on the mine supply for business, and the mine manager adores them—intermittently. During conference calls with the mine manager, the gold reserve owner idealizes and showers them with love bombs—toxic, affection-filled words or gestures that make them feel as if they’re worth more than all of the gold in the mine and reserve combined. One day, the reserve owner visited the manager’s mining site after they hadn’t heard from them for several weeks. Upon arrival, the reserve owner greeted the crew with a charismatic, Cheshire cat smile. As soon as they entered the gold mine manager’s trailer office, they proceeded to devalue and shame them by joking and criticizing their managerial skills, as well as asserting that they’d never amount to anything. After the visit, the gold reserve owner threatened to discard or replace the mine manager as a business partner—which is known as triangulation. In the end, the gold mine cave walls remained packed with the valuable element—despite the gold reserve owner’s slander. However, the mine manager couldn’t help but feel depleted, as if their internal gold mine—previously packed with positive energy—had been completely demolished.

Throughout this scenario, we witnessed the 3 narcissistic abuse cycle stages: 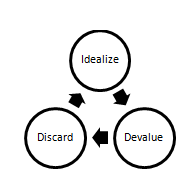 This sequence is brutally exhausting and comparable to a never-ending washer spin cycle that often leaves one feeling trapped and helpless—squeezed of every last drop of positive energy until they’re completely parched and then tossed into the dryer for further torment.

We also observed specific abuse tactics, such as:

Overall, narcissists have no shame in their game. They’re literally shameless.

People may say, “Two can play that game.” However, when you’re up against a raging narcissist, it’s best to avoid playing dirty. Ideally, it’s best to avoid all conflict. Engaging is likely to drain your energy gold mine even more and simultaneously boost the narcissist’s gold reserve or sense of grandeur. If you’ve seen yourself in the above scenario as the gold mine manager, speaking to a professional can be one of the first steps to learning how to guard your energy mine and protect it at all costs.